There is a saying that goes like this: "Forget your wife's birthday once and you will never forget it the rest of your life." Thank God I am spared of a woman's wrath simply because I forgot to greet my wife a happy birthday.

I can never forget her birthday. She made sure I did not in a very subtle way. She chose the same date to be our wedding day. Hence, last Friday, we did not only celebrate her birthday but our 22nd wedding anniversary, too. Twenty two years and still going strong. As has been the family practice, we went on an overnight stay in a different place to bond. Originally, we planned to stay in a hotel in Tagaytay but we all agreed we wanted something different. We remembered how much we enjoyed Balay sa Indang and decided it was worth a second time. And have fun we did.

We arrived there at around 11, in time for lunch which was made up of fresh vegetable salad you laced with oranges, sweet corn and eggs and a choice of two dressings. For the main course, we were served Java rice and white rice, chicken barbecue, pesto spaghetti and steamed fish. After lunch, the guys played billiards while the girls helped their mom fix our things inside the room. We jammed and sang a few songs and went swimming afterwards. At dinnertime, we pigged out on bagoong rice, crab stick wrapped in fried lumpia wrapper dipped in a wasabi sauce, onion soup, shrimps with mushrooms, vegetable garnished with bacon and t-bone steak.

The weather was so good you would never think it was summer. The terrible heat we experience here in Manila has not touched that part of the country. If only I can stay there everyday the whole summer season.
Posted by rolly at 6:03 AM 19 comments:
Email ThisBlogThis!Share to TwitterShare to FacebookShare to Pinterest
Labels: family, nitz, relationship

Please check this out

Once again, it is national poetry month - in the United States, at least. I do not know when our's is, if we celebrate it at all. As has been a practice at the Writing Village, to which I belong, the advanced poets launched another poetry exhibit. This year's issue is dedicated to my friend, Arlene Lawson. I had been invited to join and this is my contribution. The poem is something I've written about my mother when she was still alive.

If you still have time, you can also find several of my works in other places including a piece of my artwork included in the writeup and the poems on exhibit the past four years or so in the archives. You can leave a comment or two if you want. To access the guest book and the forum, use 1234 as your username and password. Check it out! Thanks.
Posted by rolly at 6:39 AM 6 comments:
Email ThisBlogThis!Share to TwitterShare to FacebookShare to Pinterest
Labels: poetry

We left on Thursday at 4:00 am. We were delayed as our agreement was to leave at 1:00 am to avoid the traffic. Luckily, we only experienced being jammed at the Toll gates and at Tarlac. The ride was smooth thereafter. 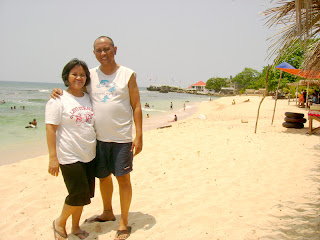 First stop was Lucero, a small island of ten barangays somewhere in Bolinao, a town right after Alaminos. There, the children experienced living in a remote island with nothing to do but enjoy the scenery, play cards, eat and sleep. Good Friday, our host took us to a one hour trip to another island called Patar where we bathed for a while. But the best was yet to come. 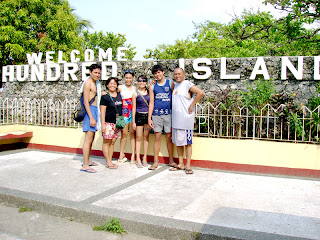 Highlight of this trip was on Saturday where we went to the famous Hundred Islands arranged by my wife and Vivian with Lean Braganza, son of Alaminos Mayor, Honorable Nani Braganza, former DAR Secretary and one time Congressman of a district in Pangasinan. Upon arrival, we were treated to a hefty breakfast of fried rice, boneless bangus, bite-sized longganisa and eggs cooked over-easy. We were then led to the port where we were taken to a big boat called The Adventure. 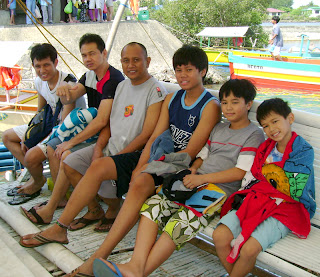 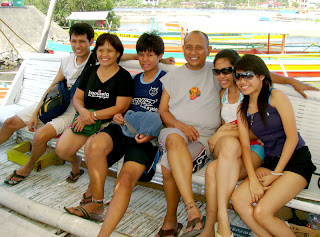 We scouted for an island that was not thickly swarmed with people but to no avail. We settled going to Quezon Island. However, as it was already late, we couldn't find a place to stay. This turned out to be a blessing in disguise,though, as the boat we have was big enough to cook, eat and stay comfortably and have a break from swimming.

That night, the wives were about to cook dinner when Lean arrived. He invited us for dinner. Guess who showed up after the sumptuous dinner. No less than the mayor himself. He stayed with us until it was almost midnight.
Clad in shorts and t-shirt, he is still the Nani Braganza we knew when he was still a student - simple, articulate and sincere. We talked about the problems confronting the town and his constituency, how he got rid of jueteng and drugs, and his plans and courses of actions in the future. Honestly, I am impressed knowing that he always means business even when he was just a young student. 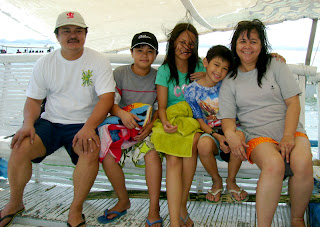 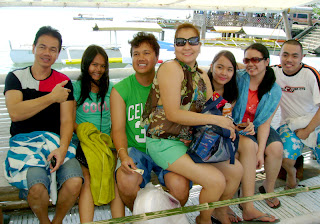 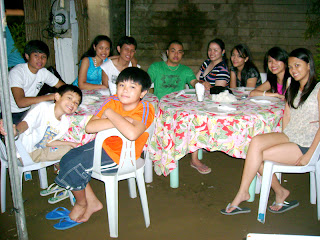 Posted by rolly at 9:01 AM 11 comments:
Email ThisBlogThis!Share to TwitterShare to FacebookShare to Pinterest
Labels: family, friends, travel 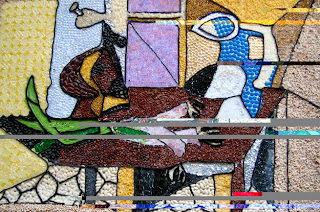 For the final project of the Freshmen, I have decided to introduce my students to one, if not the greatest painters of all time, Pablo Picasso. This is the first time I gave this project thinking that if it will be successful, I'll incorporate other great painters, including Filipinos, next year. My purpose for the project is to show that:

1. great paintings do not always have to be are mirror images of (kamukhang kamukha) objects;
2. painting is thinking. If they read what cubism is, how it came to be and how it is done, like I told them to. (I have yet to create a module for this one).
3. That there is no truth to the saying that "even a child can do this" sort of thing.
4. That there are rules to follow even in modern art, viz., volume, harmony, balance, etc.

First, I let them look for pictures of Picasso paintings, read its history, life, etc. Then, on an illustration board, draw the picture using grids. Instead of using colors, I asked them to substitute the colors with different materials like threads, buttons, sequins, rice, seeds or whatever they can find that matches the color of the original and voila! A textured Picasso painting. Here are more samples. 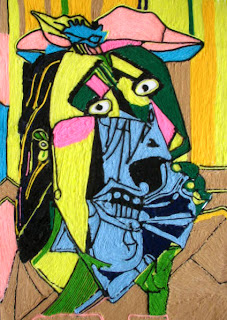 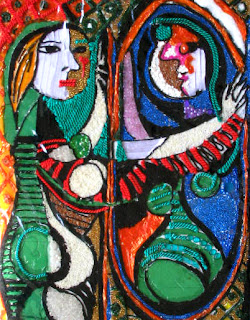 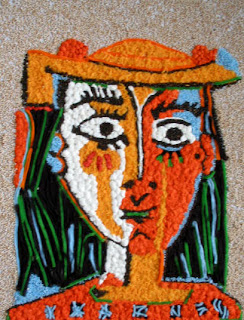 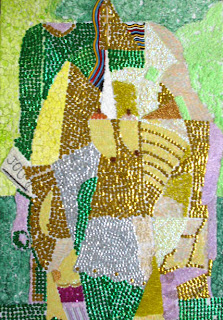 And then there was one 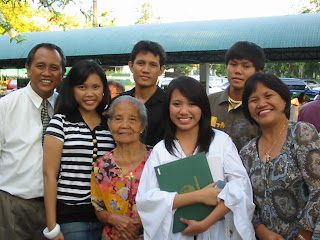 About twenty one years or so ago, I was a young man who brought his children to school. There I was on my way to work with four little children at the back of the car, cruising along SLEX, way too early in the morning as the school is quite far from home. It seemed like it was going to be forever. But time does fly and fast. I have become old and one by one, the children are flapping their wings and taking off to conquer their own world. First, my eldest, left about five or six years ago. Then, my second, graduating as the concert master for the school orchestra under his belt last year and now. my third child, Kim. Yup! My third child said goodbye to her school for thirteen years last Saturday. I am down to the last child riding with me to school! 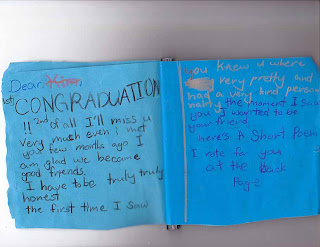 One side story prior to my daughter's graduation that I would like to share is this young Korean girl who befriended her. You see, Kim, my daughter, is by far the friendliest of the four children. For one reason or another, she became very friendly with the Koreans who study in our school. She knows everybody by name and everybody just have to call her nanme whereever they meet her. Well, there is this young girl, about ten years old, who talked to her inside the comfort room and became friends with her. Two days before graduation, this girl gave Kim a letter which touched us very much. It starts with Congraduation!!! I don't know but I just find that ingenious? In the letter, she also included a short poem. Remember that this is a Korean girl just beginning to learn English. I am reprinting it here to show you how sweet the girl is, naive, daring and talented. THis is how it goes:

Why
Why now?
why not later after 2 yrs
why will you live
So soon
With no notice?
I hate goodbye's
Why? O Why?
Should I Say
Goodbye.
Cant Collage or
University
wait or can't
you wait for me
to turn your age 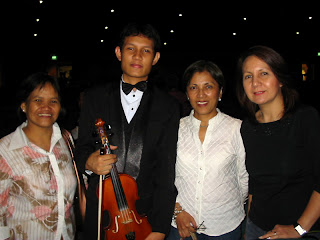 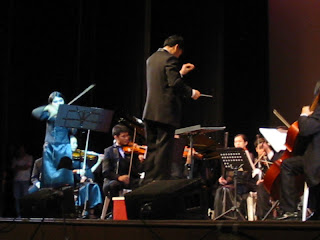 In another story, my eldest son, who plays violin for the University Chamber orchestra, played in An Overture to the Soul on March 13, the group's final concert for this schoolyear. What made the evening a true treat was that they played together with some guest performers coming from the Manila Symphony Orchestra and the UST Symphony Orchestra. Not only did my son looked like a pro in his tux but the repertoire was quite impressive, too.

If only I could invite you all, I would have. Don't worry. I have yet to see my son play my dream concert. That would be him playing Beethoven's Romance in F with a full orchestra. By then, I would have saved enough money to invite you all :-).

As a gift to his graduating sister, Mickey not only attended the graduation but even played in the school's orchestra where he was formerly its concert master. Needless to say that his friends were happy to see him play with them again.

By and large, my "accomplishments", so far, are not bad for someone who has to bleed to earn for a simple living.