My sister is fighting for her life. She's been bed-ridden for more than three years now. She is so weak that we never informed her that my aunt and my mother, to whom she was very close, have passed away lest she goes into depression which might have caused her early passing.

Like me, she is diabetic and has been one since I was a small child. Too bad that diabetes is an affliction for the hard-headed, she ate with gusto even if she knew it's bad for her. Her organs, most especially her kidneys are failing now. Edema has set in and she's very bloated and is no longer cognizant of her surroundings. Her eldest daughter who resides with her family in the States has come home to be reunited with her mother. All we can do now is pray and request that friends and acquaintances do, too. Please say a little prayer for her tonight. Thank you.

Her eyes have long held had that empty stare.
She gazes through you, seeing nothing
or as if trying hard
to figure out who stands near her.

Not today. As a matter of fact,
they even hinted a smile
as she looks at the tree beside her window.

Two birds land on the tree with a mouthful.
She hears chirps or are they cries for help?
She can only guess these are hungry birdlings
for she's been bed-ridden for years.


The doctor arrives toting a grocery bag
filled with medications.
He touches her hand, carefully makes a tourniquet
out of surgical gloves,
starts looking for her veins.

The tweeting becomes fainter and soon stops
as the pair of birds regurgitate and feed
their young.


His task proves to be harder than usual.
He taps her with his fingers several times
but no success. He tries the other hand
to see if he can find the elusive carrier of blood.

All flesh and bones, feathers scarce, their veins
visible and look like they might explode
at the lightest touch.
They nibble and munch never leaving any morsels
to be strong for the coming weeks.

Her husband transfers the food from blender
to the canister. Begins to pound on an anti-biotic
he shreds into tiny pieces to fit the tube.
The doctor finds a vein and pricks it with a needle.
The thrust is like a stab in his heart. This is his mother.

He connects the tube with the IV
and thinks about the birdlings in the nest.
Soon, those birds will learn to fly,
while she will have to close her eyes.

My sister passed away this afternoon, June 21, 2008. She is now at peace and with our Lord. Thank you for your prayers.
Posted by rolly at 7:32 PM 20 comments:
Email ThisBlogThis!Share to TwitterShare to FacebookShare to Pinterest
Labels: death, ditse, family, poetry

Last Friday, I stood as principal sponsor at a wedding to a very good friend. A wedding has always been a very happy occasion. It is a testimony of love and devotion, a sworn committment to stand by your partner no matter what. Well, this couple is a very happy one and making a committment when you're at the top of things is not so hard to fulfill. I wish them the best. 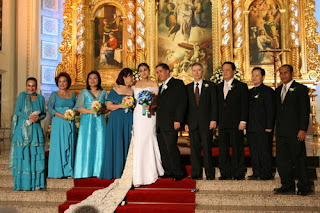 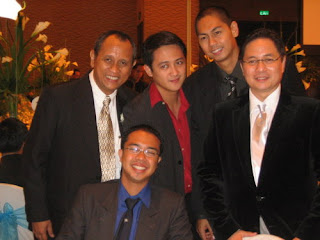 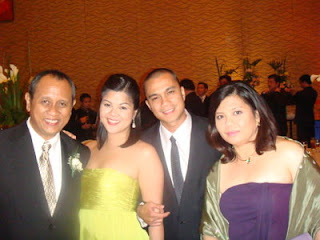 with friends at the reception

The following day, I attended an exhibit of the famous Saturday Group, a group of reknowned painters that was formed forty years ago and boasts of having in its roster luminaries that had been named national artists like Cesar Legaspi. The group paid homage to Malang, a well-respected practitioner and probably the oldest painter alive today. I managed to have a picture with him taken by friend and member,Omi Reyes. 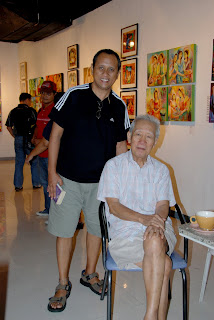 Finally, Tuesday was my youngest daughter's birthday. We celebrated it with a simple dinner at Mary Grace at the Serendra. Unfortunately, Mickey couldn't come as he had a class at the time. Nevertheless, it was a fun evening enjoying it with just my children and my loving wife. Truly a night to remember. 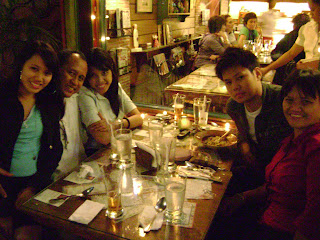 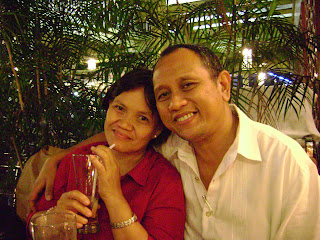 Me with my lovely wife
Posted by rolly at 4:08 AM 16 comments:
Email ThisBlogThis!Share to TwitterShare to FacebookShare to Pinterest
Labels: friends, wedding

I have always been fascinated with watercolor paintings. I marvel at watercolorists for I know how hard the medium is. To me, watercolor is by far the most challenging of all. For one thing, one must know how watercolor behaves. One should know how to "bleed" and control color and water and turn the piece into a beautiful harmony, an explosion of colors that looks like everything you see has been a product of serendipity and yet, I know that the composition has been meticulously planned. I only look at watercolorists with envy as they dip their brushes in water and then, with a thick amount of color, playfully apply this onto a paper. There are two ways this can be done. One is applying the color on paper that is as wet as something that has been left to drench out in the rain, or dry as an arid desert. I try using watercolor from time to time. Well, I get as far as the playful part but my works are more serendipitous than they are planned. See for yourself. 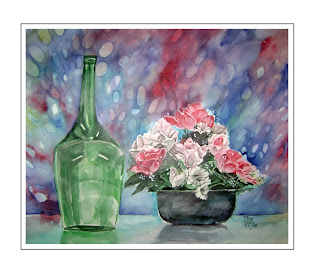