To err is human, to forgive divine

The adage to err is human, to forgive divine is only true for errors committed unwittingly or without malice. Blame it on man's frailty for man is, after all, prone to commit errors in judgment. Noone is perfect! as they say. However, what if the error is done deliberately and continuously that it becomes a habit? A habit so bad that it subjected a lot of people as prey to its whimsical disregard for human welfare? Something that is so bad it brought hundreds of people live in abject poverty? Shall we forgive him?

Such is the issue on Erap's having been pardoned by the president of the country. Erap has been found guilty of plunder and was just awaiting execution of his verdict when PGMA granted him pardon, something he earlier stated he would have not accepted for it will mean a few concessions for him, viz., acknowledging that Arroyo is a legitimate president and that it would imply that he is guilty as charged. He took another route when he realized he would soon be sent to jail. Talk about "estoppel" huh, siu?

If I remember correctly, there was at least a proposal in congress to make the crime of plunder be treated as a heinous crime resulting to a death penalty. I do not know if that ever became a law but it just shows how erious the crime is. Someone in congress thinks that the deed is so dastardly that a culprit should be meted
out the death penalty. Why not? We only have to look at our countrymen living in abject poverty to realize that plunder is so immoral that while there are families who barely eat, much less have other essentials in life, there are those who live in extreme luxury out of the nation's treasury, something we all shared to build.

Plunder was proposed to be a heinous crime to become a deterrent for prospective and serving public officials to engage in. Erap's conviction and possible jail term would have set a precedent for all time and should have made these officials realize that the administration meant business. Arroyo did set a precedent. She
re-enforced that in this country, public officials could get away with murder.

OF course, this is all premised under the idea that Erap is guilty. That he had been given a fair trial and that with the battery of lawyers he had, his rights as an accused had been duly protected. If he was wrongly convicted, then that is another story.
Posted by rolly at 6:42 AM 17 comments:
Email ThisBlogThis!Share to TwitterShare to FacebookShare to Pinterest
Labels: politics

This one's up for grabs 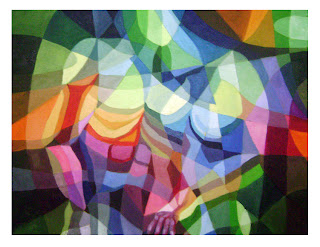 
This one is not a commissioned work and will be part of my collection. Anybody who may be interested of owning this can contact me at my email addy, rollydelossantos@gmail.com. This one sells for $300.00 excluding shipping and handling.
Posted by rolly at 3:56 AM 26 comments:
Email ThisBlogThis!Share to TwitterShare to FacebookShare to Pinterest
Labels: art, painting

I think we brought it on ourselves

I think I have kept silent for too long. I have passed on several issues that occupied a lot of bloggers recently. I have no intentions of just jumping into the bandwagon. The reason is simple - if I feel I cannot make a good contribution on the subject. I'd rather not talk about it. Recently, a certain segment of the premier showing of this season's Desperate Housewives created quite a stir with Filipinos when Teri Hatcher's character wanted to check a doctor's credentials to make sure that it wasn't just "from some med school in the Philippines". A lot
of Filipinos took offense as they claim that it questions the credibility of medical schools in the country. Even government officials had joined the fray and demanded for an apology from the producers of the show which, to date, has already been given.

After the first onslaught of attacks, the air is still filled with steaming fury, I rise up from the smoke and would like to give my two cents worth.

While the remark was intended to be a joke or a witty remark from the character, it turned out to most Filipinos as a criticism in the end, hence, I am treating it as such. When being criticized, which is quite often too, the first thing I do is to do some honest soul-searching and after I have licked the wounds of my battered ego. I ask myself if there is truth to the criticism. If there is even a hint of truth to the criticism, I try to mend my ways.

To be offended at a certain remark or gesture is the easiest way to confront a similar situation. But now that we have made our point, why don't we do some introspection? I wonder what the writers of the show were thinking when the country suddenly crossed their minds. Why not another third world country, I ask. Why do they think that would have a comic jab to the situation? What was their basis, if anything at all? Surely, the name of the country did not just pop in at random.

Flashback a few years back to a scandal that happened in the medical world. The Fatima Medical School rocked Manila when allegations of cheating in the exams resulted in the questioning of the licenses awarded to its students. Much recently, the nurses had fallen prey to people who were out for a quick buck out of their vulnerability. What about the diploma mill schools and the Recto give-aways? News of these events had come from our shores. Let's go a lot further in time when during the 80's, young boys who went to the US for the little league turned out to be not boys at all! And of course, the very rampant cheating during elections just strenthen one thing - that we are living in aa country full of cheaters. Now, can we claim that the potshot remark is without basis?

While there is reason for us to be angry that we are being pictured in a bad light, I think the more important question we shoul ask is how do we correct this image? How do we erase a tarnished image strengthened throughout the years? It is hard but even a mighty boulder lying passively along the shore yields to the contstant beating of the waves.

Am I angry at this episode of the Desperate Housewives? Hell yes! But for another reason. I am angry because my elders way down to my peers have erred in shaping this nation. I am angry because some individuals have made this country vulnerable to attacks by some foreign show. I am angry that we lay prone and open to criticisms made defenseless for such may border on the truth and it stings to the core of my being. I am angry because while I live on a day to day existence these shenanigans are scot free continuously wreaking havoc on our very being.
Posted by rolly at 1:47 PM 23 comments:
Email ThisBlogThis!Share to TwitterShare to FacebookShare to Pinterest
Labels: commentary, essay
Newer Posts Older Posts Home
Subscribe to: Posts (Atom)