Boy, but he grows fast!

It's just been a month since I mentioned that we got ourselves the first family pet. You might be thinking that it's a little late for us to acquire a pet but I was not very kin on having one while the kids are growing up since I know that having a pet dog can be serious business. I would like to make sure that my children know how to handle a dog responsibly as I did not want any problems on my hands. As a matter of fact, my youngest had a tragic experience with my SIL's dog. He was bitten on the head! The doctors made sure that he has got to have his shots as the nasty bites were near the brain. Anyway, seeing how excited the children are upon seeing this puppy, I knew we are prepared to have a pet. 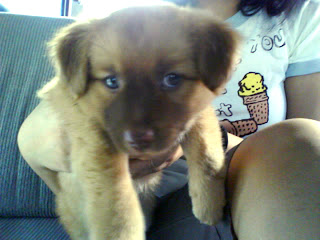 His name is Yogi, probably a mongrel given to my wife as a gift from Tagaytay for having stood as sponsor for a friend's child's wedding. He is a very cute little puppy and a darling to all of us.

Well, he is beginning to learn the rules of the house now. He no longer bites hard and has lessened jumping on everyone when excited. I have gotten him accustomed to having his neck on a leash everytime I take him out for a walk. Even managed to make him stay put while on a leash while I cleaned the car. Last Saturday, I bought him some goodies like dog biscuits which he adored. Took him only three days to finish the whole pack. I also bought him a nail cutter and a fake bone, which I might say are both inutile right now as I could not work the nail cutter with him refusing to give his paw, and yes, you figured out correctly, probably a tasteless bone.

He's grown very big now. I could not imagine how he'd growb this big in just a little over a month. He's gotten so big that we had to find a new haven for him. Have a look for yourself: 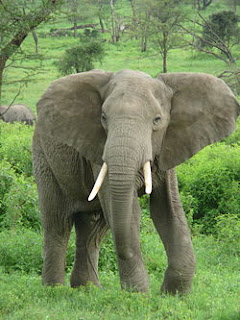 Posted by rolly at 5:43 AM 11 comments:
Email ThisBlogThis!Share to TwitterShare to FacebookShare to Pinterest
Labels: pets, yogi

It seems like we who are traversing the SLEX are going to be facing hard times again. The continuation of the skyway will soon be ongoing and now that they have narrowed down the road, the telltale signs of heavy traffic on both sides are imminent. There has never been a single day when I have not been stuck in traffic going home for two weeks now! What's worse is that a new construction is ongoing at C5 and I have to endure another traffic grid from Market Market all the way to Buting.

What really gets my goat is learning that the operators of the SLEX have revived their stupid solution of decongesting the north bound vehicles every morning by having a counterflow scheme. What this does is decongest the traffic by some 10 per cent for the north bound vehicles and demobilize the south bound ones a hundred percent from the foot of the connecting C5 bridge all the way to Bicutan.

I have told a friend once that Citra (the company running SLEX) should not charge vehicles using the highway everytime there is a humongous traffic. To think that commuters have to pay a whopping Php65 from Nichols till Alabang one way! And for what? Only to be stuck for hours. But then, my friend said, the more that we should be charged. After all, we are staying on the highway a longer time.

In a different story, I was watching the news this evening when a story caught my attention. The story links Joe de Venecia to smuggling. Naturally, De Venecia denies the charge and countered it is the First Gentleman and his son who have connections with smugglers. One of the good things that come out from this ZTE deal is that these trapos are on each other's throats and throwing mud at each other. Hah! Let them kill one another, I say, and rid the Philippines of them. We don't need these greedy bunch whoever they are.
Posted by rolly at 8:50 PM 13 comments:
Email ThisBlogThis!Share to TwitterShare to FacebookShare to Pinterest
Labels: rambling

One of the projects I give my students is one that teaches them to use three basic color harmonies, viz., monochromatic (use of different shades of one color), analogous (related colors), and complementary colors (colors lying opposite each other in the color wheel). What I do is let the students choose their own theme, their own medium which they are most comfortable with minimizing my control over their form of expression. Anyway, here are some of the works they produced. 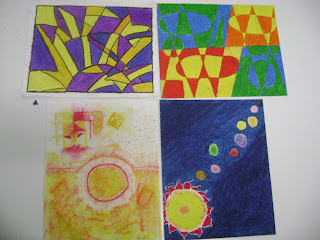 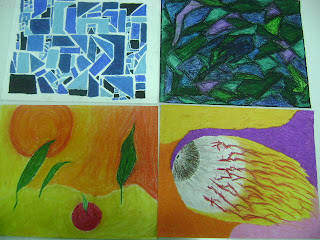 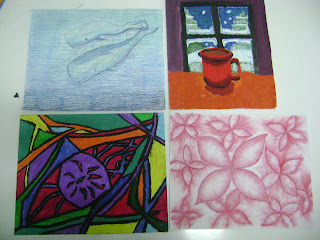 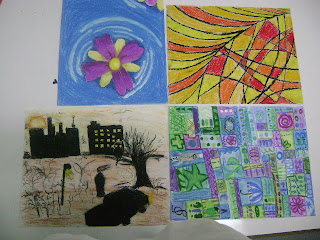 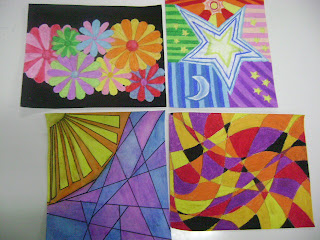 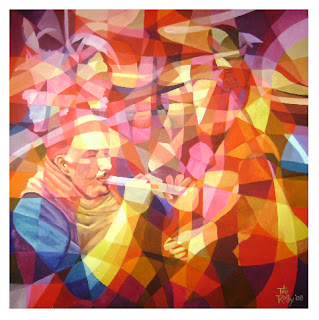 This is another commissioned work which is bound to go to Canada. It is one of the hardest pieces I've done so far for the simple reason that I could not decide the colors to use, I had to change colors as I went along. Since it was the owner who suggested the theme and color scheme, my main problem was how to make a scene of mountain people who are accustomed to living in a cold emvironment look good on a warm tone, ie., red. That was my patron's request, red! Very limiting and yet very challenging. I decided to go analogous on this one using tones related to redm and yes, a little blue hre and there. There's the finished product. Hope she likes it. Hope you like it, too.:-)
Posted by rolly at 3:44 AM 25 comments:
Email ThisBlogThis!Share to TwitterShare to FacebookShare to Pinterest
Labels: art, painting

Much ado about nothing(?)

Finally, Rodolfo Lozada, has surfaced after a search for him since he arrived from Hong Kong last Tuesday. As you may know by now, he is supposed to testify on the NBN deal at the Senate, presumably to shed more light into the controversy. People had been worried for his life as the powers that be may have had him liquidated lest he spill out a testimony that will bring a lot of people down.

This morning, I received a text message from Doc Emer saying that Lozada has been found. As the text message was received at around 4:00 am, I have no way of checking the news on tv. It was later on, at around 5:00, after my morning routine, that the news came out that Lozada was in La Salle Greenhills.

So, what was the fuzz all about? He strengthened the case on former Comelec chair, Benjamin Abalos and stopped there. All he kmows about the FG Mike Arroyo are not first hand information - hence, hearsay. We all know that hearsay testimonies are not acceptable in court. With Lozada's emergence, we are still left in the dark. Too much ado over nothing, I might say.
Posted by rolly at 7:50 AM 6 comments:
Email ThisBlogThis!Share to TwitterShare to FacebookShare to Pinterest
Labels: politics

I gotta do it right!

As I have mentioned in my previous post, I am a new father again. Well,it seems like it only that the new comer is a puppy. The only thing is that this is the first time we are owning a pet dog, hence, we are just being introduced to a new world of raising a puppy just as the world is being introduced to it. ONe of the problems we now encounter is that Yogi has not yet acquired biting inhibition. He bites when he is excited as puppies do, as I learned from my research. This puppy has been separated early from its mom that it has not been socialized with its own litter and other dogs. You see, puppies do not have hands like us humans (duh) so what it does is to use its mouth. Biting inhibition is taught by the mother and siblings. When the puppy's bite gets strong,probably while sucking on the mother's teat, the mother gets angry, growls or leaves. The same thing with other dogs during playing time. This is how the puppy learns to control its bite. After a series of reading various materials on dog training, I think I've got it right. He no longer does that to me. But still does it with my daughters.

I think I have established with him that I am the alpha dog. He can now follow my commands - that is nobody is there with me. I guess he's still too young for training. But I can already make him sit when I tell him to. Patience is what I need and he'll get it in due time. Who wouldn've thought I will be a father again! :-)
Posted by rolly at 3:43 AM 8 comments:
Email ThisBlogThis!Share to TwitterShare to FacebookShare to Pinterest
Labels: pets, yogi
Newer Posts Older Posts Home
Subscribe to: Posts (Atom)