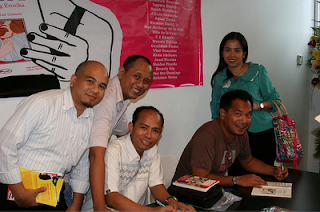 Nick, me, Apol, Batjay and Ajay

It seems like the place to be for Filipino bloggers at around 3:00 pm last Monday was at Fully Booked at the Serendra. I did not realize this until I have gone bloghopping and came upon sites that mentioned they were there, too. I am talking about the launching of my friend's book, Mga kwento ng mga batang kaning lamig. I was silly to assume it was only me and some blogkada friends who will be there from among the bloggers. Well, true enough, Apol,Nick and his officemate Laine were there. We were joined later by the ever so elegantly beautiful Ajay of the Manila Bulletin who managed to sneak in an interview of the "man" of the hour several hours later. As it turned out, there were other bloggers there, too. Why an I surprised when it is the famous two-time awardee of blogger of the year Batjay who has come to town? Naturally, the event will be attended by bloggers!

Our group was approached by Manuel Viloria who unselfishly shared with us some adsense tips while waiting for the ceremonies to begin. I also saw Charlotte who is a frequent visitor at this site and whom I met last December when cbs came to town. Other than these two, I didn't know who else was there. Oh, Dante, that equally famous brother who is known by my generation as Howlin' Dave, was there, too. So were RJ and from the comments in his blog, ayz. What a pity that I didn't know. We could have chatted for an hour as we waited for the ceremonies to begin. Had I only known. Now, I'm sure there could have been others. RJ admitted in his blog that he was shy to approach me at the time. If you're a blogger and you see me, please say hi. I don't bite, for sure.

Anyway, why do you think Batjay is famous? I guess it could not just be because of his pleasing personality since one has to visit his blog for sometime before ths kicks in. I guess it is because he knows his audience, honest with his writings which is never intimidating, witty with his repartee with his commenters, and most of all, funny. He wouldn't have been awarded blogger of the year for two years for nothing, would he?

We both arrived, entered the doors of Fullybooked, albeit from different ends, at the same time. What do you know? It would have been a giveaway had he been donning a Batman t-shirt. However, as complicated as his humor is, he didn't. Instead, he wore a brown shirt with "spiderman" on it.

In his interview with Ajay (thanks for the coffee, sweetheart) to which Apol and I were fortunate to be kibitzers, he was asked to whom he was writing for. Without batting an eyelash, he answered for the OFW's like me so that they wouldn't miss home that much and for Filipinos living here in the country for them to know what it is like to live in a foreign land. There are so much covered in that interview but I would not want to pre-empt Ajay's article which would come out on Monday.

The book caters to a specific target audience as opposed to having a universal theme. How can its humor be understood by Americans, for example, when practically everything in it is culture bound? Take the title for instance. No other nationality would understand the implications of "kaning lamig". Heck I don't even think Filipinos who have never experienced being a "tambay" would understand that. If I may explain, for rice eaters, the preferred choice has always been the steamy-hot-straight-from-the-pot kind. However, for the tambay sa kanto, usually teen-agers who have nothing better to do but to idly while away time at the cornier, perhaps a sari-sari store, smoking and telling jokes to one another, couldn't care if they are served cold rice. Usually, these guys would be invited to eat in a member's house for merienda (in between meals) to which they would be served left over viands and, you guess it right - kaning lamig!

Having said that, am I saying that the book can never be accepted elsewhere? Who can say? There is a saying that the universal lies in the particular. We've seen authors who wrote in their own milieu in their own space and time and yet, their works are known to us simply because the beauty of what they have written has been translated effectively. So, maybe someday, my friend will be known throughout the world once we have learned to translate our culture to be more pallatable to the international market.

At any rate, the book is a sure winner for Filipinos. Batjay has done it again and I am proud I was there to greet him. Go get your copies now before the supply is gone. I tell you, the books were all sold out even before the launch has ended.

In a related story, the Manila berks met last night, April 16, for an evening of fun. We first met at what has become our favorite hang-out, Pot nad Noodles, for some steamed fish, pata tim with cuapao, kikiam, canton (for long life, of course, wink wink) and yang chow rice. We also ordered some cold cuts for appetizer while Batjay was being interviewed. After dinner, we proceeded to Starbucks for coffee and some cake. Thanks for the pic, Doc Emer 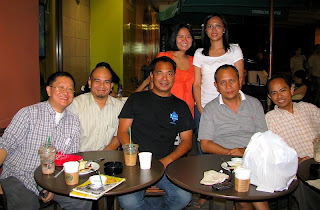 How I wish I were with you guys. It's so wonderful to share in a friend's success!

Toni oo nga. We missed you on this one and the EB tonight.

Both the book launching and the Berks' dinner must have been fun times for you and your dear buddies. Such moments are truly worth remembering. I'm very happy for you guys.

Tito Rolly, "kaning lamig" in our dialect (Ilonggo) is "bahaw". When we were in college, my friends and I would also go to a friend's house to share bahaw and tuyo especially if we're illiquid, i.e. wala ng allowance. The sharing, laughter and camaraderie over bahaw-and-tuyo (and if we can afford it, cold cold Coke, if not reheated barako kape na lang) comprise the bulk of my fond memories of college. Better than fastfood!

Bugsy Oh, that is also what we call it here sometimes. So, that's ilonggo. That's it!More than anything, it is the fun associated with the bahaw na kanin that makes it remarkable.

it's great to be with friends huh?

now, I am not snooping as I am a regular commenter here. hahahaha...kita ko na si doc emer and mari! :)

looks like you're having a great time. very nice of you guys to support a friend.

charlotte The pleasure is always mine. So, sa bicol, bahaw din tawag.

ipanema We always have a blast everytime we see each other. Sana andito ka din.

I really wish I could have been with you guys.... mukhang ang sarap nga pagkain! hehe!

It really looked like you guys had a lot of fun. Hay, na miss namin ni Toni yung pata tim!!!!!

batjay The pleasure of meeting with you has always been mine. Let's do it more often. Looking forward to seeing you again and Jet next year.

Bon voyage and give jet a hug for me, will ya?

Manuel It was nice meeting you, too. Thanks for the tips.

i forgot to powder my face hahaha! thanks sa kape tito rols! at thanks kay doc sa cake! :D

mari You do not need anything to cover up your face. Tanong pa natin kay....